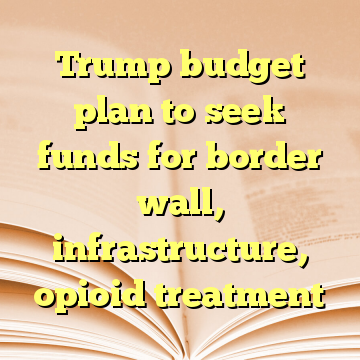 (Worthy News) – President Donald Trump will unveil his second budget on Monday – seeking to make good on his promise to bolster military spending and requesting funds for infrastructure, construction of a wall along the border with Mexico and opioid treatment programs.

The budget plan, which is viewed largely as suggestions by Congress, which has the constitutional authority to decide spending levels, will likely draw criticism from conservatives who worry that Republicans are embracing deficit spending.

The proposal will include $200 billion for infrastructure spending and more than $23 billion for border security and immigration enforcement, Mick Mulvaney, who heads the administration’s budget office, said in a statement on Sunday night. [ Source: Reuters (Read More…) ]