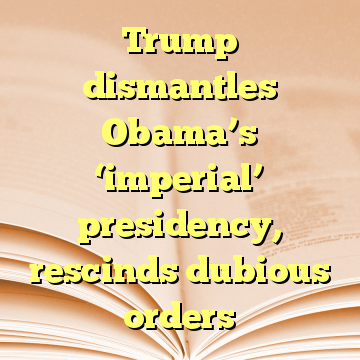 (Worthy News) – Democrats are attacking President Trump for “dismantling” President Obama’s legacy on everything from Obamacare subsidies to immigration amnesty, but nobody knew better than Mr. Obama how vulnerable his go-it-alone agenda would be if Mr. Trump won the election.

Unable to work with a Republican-led Congress for most of his presidency, Mr. Obama did what he could with his presidential “pen and phone,” issuing executive orders, rules and regulations that in many cases could be overturned by another stroke of the pen — this time by a Republican president. Long before Mr. Obama left office, Republicans were accusing him of overreaching presidential authority, and Mr. Trump was vowing to overturn his unilateral decisions.

Among the actions Mr. Trump has taken since Jan. 20 are pulling the U.S. out of the Paris climate agreement (a U.N. accord never ratified by Congress), revoking deportation amnesty for young illegal immigrants called “Dreamers” (to Republicans’ complaints that he was exceeding his authority, Mr. Obama dared lawmakers: “Pass a bill”), decertifying the Iran nuclear deal (and requesting more congressional input), ending government subsidy payments to insurance companies under Obamacare (never approved by Congress), and rolling back about 800 other Obama-era government regulations on a broad front, including portions of the 2010 Dodd-Frank financial regulatory law. [ Source: Washington Times (Read More…) ]