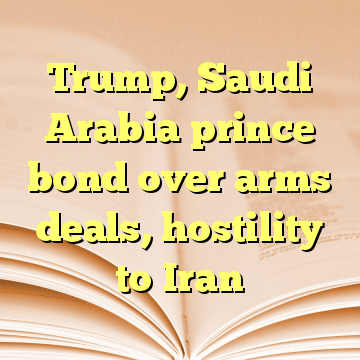 (Worthy News) – President Trump forged a bond Tuesday with Saudi Arabia’s new crown prince over increased U.S. military sales to the kingdom and their shared disapproval of the Iran nuclear deal, as they sought to erase eight years of strained relations under former President Obama.

Hosting 32-year-old Crown Prince Mohammed bin Salman at the White House, the president said the U.S.-Saudi relationship is now “as good as it’s really ever been.” Mr. Trump said the Iran deal, which he is threatening to rip up by a congressional May 12 deadline, was a key item on their agenda.

“Iran has not been treating that part of the world or the world itself appropriately,” Mr. Trump told reporters. “A lot of bad things are happening in Iran. The deal is coming up in one month, and you will see what happens.” [ Source: Washington Times (Read More…) ]