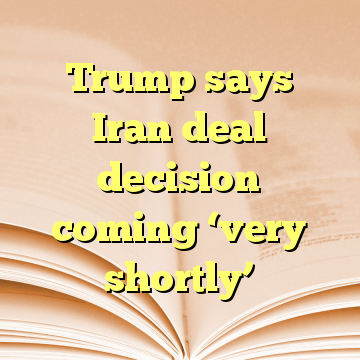 (Worthy News) – President Donald Trump says he will “very shortly” announce his decision on U.S. participation in the landmark 2015 nuclear deal with Iran, as aides prepared for an end-of-the-week rollout.

Trump has until Sunday to notify Congress whether Iran remains in compliance with the accord under which it limited its atomic program in exchange for sanctions relief. A congressional source and a non-governmental source familiar with the matter said the White House was looking at a Friday announcement after scrapping a tentative plan for Thursday.

Speaking at the White House on Wednesday, Trump did not discuss specific timing but told reporters: “You’re going to see very soon. We will be announcing that very shortly.” [ Source: Washington Times (Read More…) ]