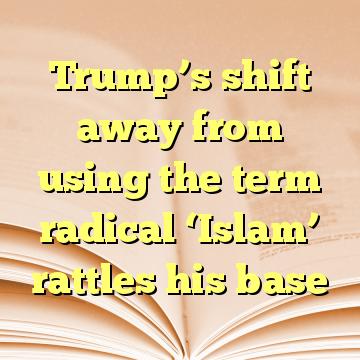 (Worthy News) – As President Trump’s staunchest backers wonder why he has suddenly dropped “Islamic” from two important war speeches, the mystery in the latter instance can be traced to the Pentagon, says an administration source.

On the anniversary of the Sept. 11, 2001, terrorist attacks, Mr. Trump delivered a passionate speech on the grounds of the Pentagon where the hijacked American Flight 77 crashed into the west block.

The attacks there, at the World Trade Center and on a field in Pennsylvania, which killed almost 3,000 people, were carried out by al Qaeda, a radical Salafi Sunni terrorist group then based in Afghanistan.

But Mr. Trump, who boasted during the presidential campaign that he would label the enemy as Islamic, never did so during the anniversary speech. Instead, he used descriptions such as terrorists, enemies and savage killers. [ Source (Read More…) ]