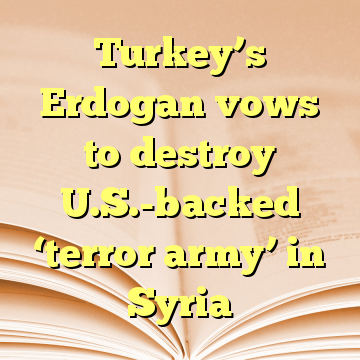 (Worthy News) – Turkish President Recep Tayyip Erdogan vowed to destroy a 30,000-man border security force in Syria, trained and equipped by Washington, characterizing it as a “terror army” designed to infringe on the country’s sovereignty in the region.

During a vitriolic speech in Ankara Monday, Mr. Ergodan lashed out at the burgeoning security force and America’s continued military support for Kurdish separatist groups in Syria tagged as terrorist organizations by Turkey.

“A country we call an ally is insisting on forming a terror army on our borders. What can that terror army target but Turkey?” Mr. Erdogan said, referring to the new Syrian security force and the NATO alliance shared between Ankara and Washington. [ Source: Washington Times (Read More…) ]