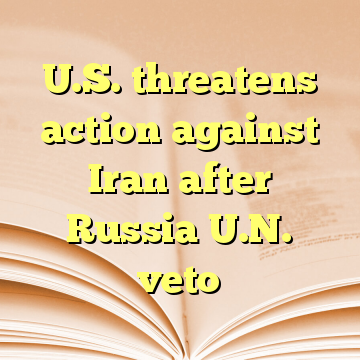 (Worthy News) – The United States threatened unilateral action against Iran on Monday after Russia vetoed a western bid for the United Nations Security Council to call out Tehran for failing to prevent its weapons from falling into the hands of Yemen’s Houthi group.

“If Russia is going to continue to cover for Iran then the U.S. and our partners need to take action on our own. If we’re not going to get action on the council then we have to take our own actions,” U.S. Ambassador to the U.N. Nikki Haley told reporters during a visit to Honduran capital Tegucigalpa.

Haley did not specify what kind of action could be taken. [ Source: Reuters (Read More…) ]