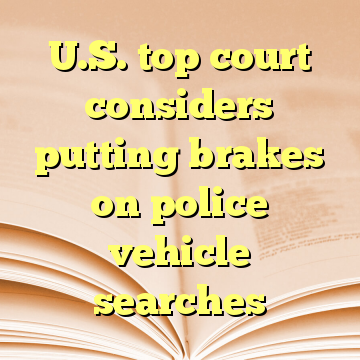 (Worthy News) – U.S. Supreme Court justices on Tuesday wrestled with the scope of police authority to search vehicles without warrants, with Chief Justice John Roberts referencing the shiny red convertible taken for a joyride in the 1986 comedy film “Ferris Bueller’s Day Off” to make a serious legal point.

The justices heard arguments in two cases in which convicted defendants are seeking to have key evidence against them thrown out because it was obtained by police officers through vehicle searches conducted without a court-issued warrant.

One case involved a stolen motorcycle that was covered by a tarpaulin and parked on private property next to a house in Charlottesville, Virginia. The other involved a rental car stopped by police in Pennsylvania – driven by a man who was not named on the agreement with the rental agency – in which heroin was found.