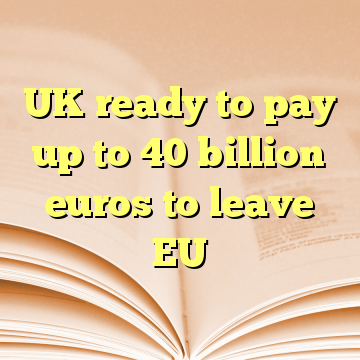 (Worthy News) – Britain is prepared to pay up to 40 billion euros ($47 billion) as part of a deal to leave the European Union, the Sunday Telegraph newspaper reported, citing three unnamed sources familiar with Britain’s negotiating strategy.

The European Union has floated a figure of 60 billion euros and wants significant progress on settling Britain’s liabilities before talks can start on complex issues such as future trading arrangements.

The government department responsible for Brexit talks declined to comment on the Sunday Telegraph article. So far, Britain has given no official indication of how much it would be willing to pay.