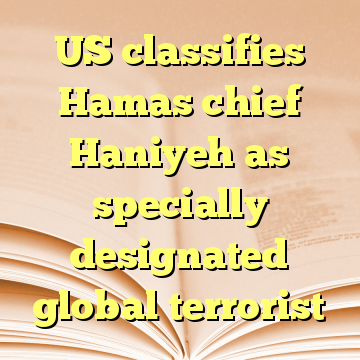 “Ismail Haniyeh has been involved in Hamas’s campaign of terrorism against Israel for years and even decades. The United States is not fooled by any attempt by Hamas to re-brand itself. We know it for what it is, a terror organization committed to the destruction of the State of Israel.”

Haniyeh called for a violent uprising until “Jerusalem’s liberation” in response to US President Donald Trump’s declaration on December 6 in which he recognized Jerusalem as Israel’s capital. [ Source: Jerusalem Post (Read More…) ]