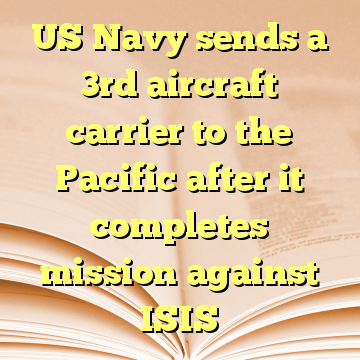 (Worthy News) – The USS Nimitz aircraft carrier and its accompanying strike group of destroyers have left the Middle East, where they had launched airstrikes against ISIS, to back up US forces in the Pacific, the US Navy announced on Wednesday.

The Navy says the Nimitz is heading to the Pacific on a previously scheduled visit, but it will be the third carrier in the region joining the USS Ronald Reagan, which stays in Japan year-round, and the USS Theodore Roosevelt, which is currently in the Pacific well east of Japan.

According to the Navy, the Nimitz just finished three months fighting ISIS, with over 903 bombs dropped. ISIS fighters are now surrendering en masse as US-backed regional forces close in on them. [ Source: Business Insider (Read More…) ]