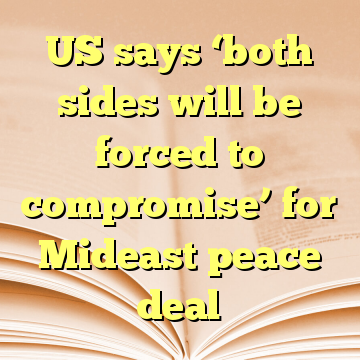 (Worthy News) – A State Department official said Tuesday that Israelis and Palestinians will “be forced to compromise” in order to achieve US President Donald Trump’s goal of brokering peace between the two sides.

In her first press briefing as the department’s spokesperson, Heather Nauert wouldn’t address a question about UN Secretary-General Antonio Guterres’s statement lamenting 50 years of Israel’s occupation of the West Bank, but pivoted to say that both Trump and Secretary of State Rex Tillerson were committed to forging an agreement despite the inevitable challenges that will arise.

“Middle East peace is something that’s very important to this administration,” Nauert told reporters. “The president and the secretary have both said they recognize that it will not be easy, that both sides will be forced to compromise.” [ Source ]