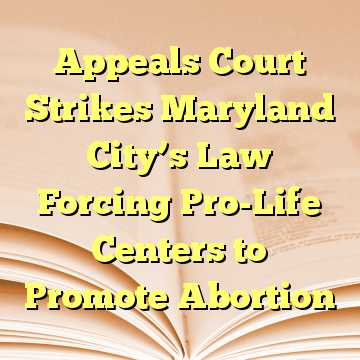 (Worthy News) – A three-judge panel of the Fourth Circuit Court of Appeals has struck down a Maryland city’s law that forced a pro-life center to post disclaimers at their facility about not providing abortions.

The panel ruled unanimously last Friday that a Baltimore ordinance requiring the Greater Baltimore Center for Pregnancy Concerns to post signs at their building saying they will not refer for abortions violates the pro-life group’s First Amendment rights.

Judge J. Harvie Wilkinson III, who authored the panel’s decision, concluded that the ordinance forced “a politically and religiously motivated group to convey a message fundamentally at odds with its core belief and mission.” [ Source: Christian Post (Read More…) ]