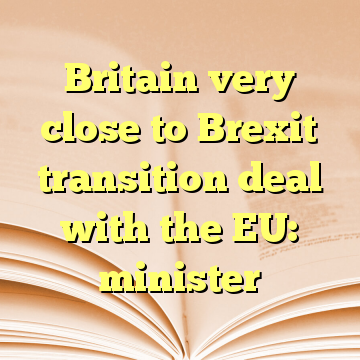 (Worthy News) – Britain is very close to agreeing the details of an implementation period with the European Union for its transition out of the bloc, junior Brexit minister Robin Walker said on Monday.

Britain has said it will adhere to EU regulations for a time-limited period after it leaves the European Union in March 2019, and hopes the details of this transition, or implementation, period, will be finalised at a summit with the EU on March 22-24.

“We recognize how important it is to secure the deal on the implementation period as soon as possible. I want to stress that we are very close to a deal at this time,” Walker said in a speech at the Institute of Directors in London. [ Source: Reuters (Read More…) ]