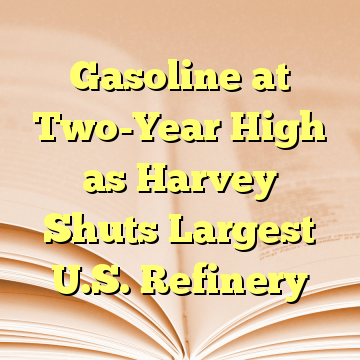 (Worthy News) – Gasoline hit a new a two-year high as investors assess the impact of refinery outages and restarts as Harvey moves away from the Houston area.

“The market right now is more worried about the tropical storm than they are about the weekly inventory,” said Matt Sallee, who helps manage $16 billion in oil-related assets at Tortoise Capital Advisors LLC, by telephone. “This storm is basically very effective in its path of shutting down refinery capacity.”

Harvey, the strongest storm to hit the U.S. since 2004, is throwing the energy market into disarray, leading to refinery shutdowns in the Port Arthur, Beaumont and Houston areas, as plants further west begin to restart. The storm is also affecting the distribution of crude and products on pipelines. Flooding from storm Harvey is “now the greatest threat” to U.S. Gulf Coast energy infrastructure, according to Goldman Sachs Group Inc. analysts. [ Source (Read More…) ]