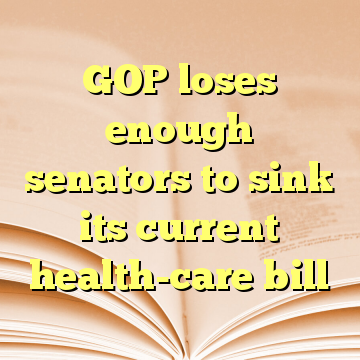 Following the announcement, Senate Majority Leader Mitch McConnell abruptly called for a vote to repeal Obamacare without an immediate replacement as the replacement effort seemed to collapse.

In messages posted to Twitter, Sens. Jerry Moran, R-Ks., and Mike Lee, R-Utah, became the third and fourth GOP senators to say they would not support their party’s Obamacare replacement plan as written. They said they would not even back a motion to proceed — a procedural vote that would start debate on the bill. [ Source:CNBC (Read More…) ]

Republicans should just REPEAL failing ObamaCare now & work on a new Healthcare Plan that will start from a clean slate. Dems will join in!