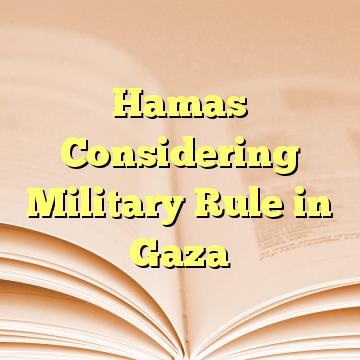 In such a scenario, Hamas will not hand the reins of power over to the Palestinian Authority, but implement a four-part plan that will create a vacuum in the Strip that could lead, among other things, to a new military confrontation with Israel.

The plan details that after Hamas relinquishes its political rule over the Gaza Strip, Gaza Police will continue to function together with local institutions that will provide services to Gaza residents. At the same time, security forces in the strip that are subordinate to Hamas will carry out civilian missions but not security ones. Hamas’s military wing would then fill the security vacuum in Gaza, by assuming control over the region’s security and deploying its forces throughout the territory, along with the smaller military forces of other factions. [ Source (Read More…) ]