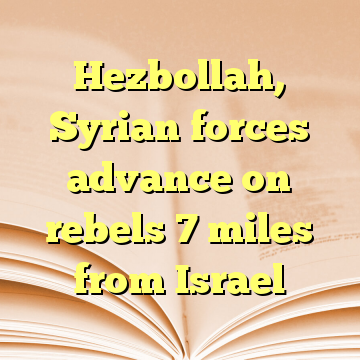 (Worthy News) – Hezbollah and Syrian army forces have reportedly launched an assault on a besieged Syrian rebels’ stronghold some 11 kilometers (6.8 miles) from Israel’s border, even as Prime Minister Benjamin Netanyahu warned that Israel will not accept Iranian proxies on its frontier.

Rebels groups have reported heavy bombardments and artillery fire on their positions, and the Syrian army claimed it had encircled Mughr al Meer at the foot of Mount Hermon, the elevated area that commands the Golan Heights.

The rebels holed up in those areas have been ordered by surrounding regime forces to surrender or face defeat, Reuters reported Tuesday night. [ Source: Times of Israel (Read More…) ]