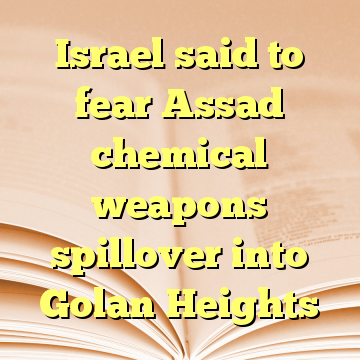 (Worthy News) – The Foreign Ministry fears poison gas may leak into Israel if the Assad regime uses chemical weapons against rebels near the Golan Heights, and has reported warned of a punishing response should such a situation unfold.

The ministry sent a classified cable to 15 Israeli ambassadors around the world, providing the envoys with guidelines for sending strong messages against Iran, Syria and Hezbollah to their host countries, following last week’s infiltration of an Iranian drone and subsequent downing of an Israeli F-16, Channel 10 news reported Wednesday.

In acknowledging Jerusalem’s fear of chemical spillover into the Golan Heights, the cable directed the envoys to convey that “it must be made clear that such an incident would require Israel to respond in the strongest possible terms.” [ Source: Times of Israel (Read More…) ]