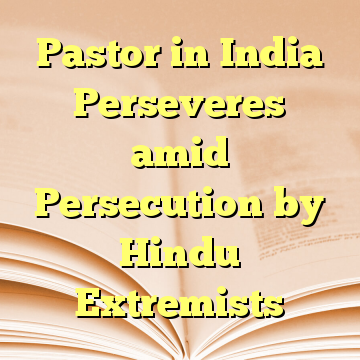 (Worthy News) – A band of Hindu extremists who had snuck into a house-church service beat a pastor with steel rods and sticks, one of them yelling that they would stop if he shouted, “Hail, Lord Ram [Jai Sri Ram]!”

“I remained mum,” pastor Harjot Singh Sethi, 26, told Morning Star News. “I did not even squeal from pain. My mouth was shut as they beat me.”

He suffered serious head and leg injuries in the Aug. 16 attack in Dabli Rathan village, Hanumangarh District, in Rajasthan state.

The young pastor and eight other Christians were attacked on the terrace of the home of Madan Lal Arora, where 20 people had gathered for worship. Police Station House Officer Jagdish Prasad said the assailants were members of the Hindu extremist group Bajrang Dal. [ Source (Read More…) ]