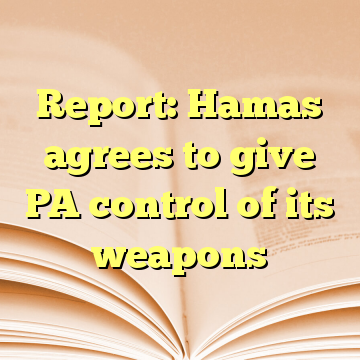 (Worthy News) – Hamas officials have informed Palestinian Authority President Mahmoud Abbas that Hamas will agree to relinquish control of its weapons if it is allowed to join the Palestine Liberation Organization, the London-based pan-Arab daily Al-Hayat reported on Friday.

Abbas’ Fatah faction controls the PLO, and if he agrees to the Hamas proposal, the Palestinian Authority would essentially assume control over and supervise Hamas’ weapons.

The fate of the terrorist group’s weapons and security forces has been a sticking point in the ongoing reconciliation efforts between rival Palestinian factions Hamas and Fatah. [ Source: Israel Hayom (Read More…) ]