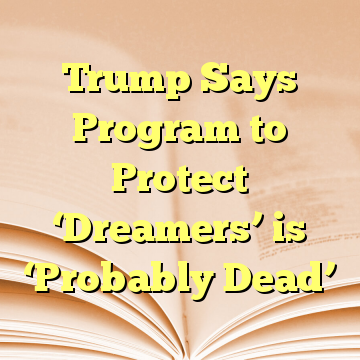 (Worthy News) – President Donald Trump said Sunday that a program that protects immigrants who were brought to the U.S. illegally as children is “probably dead,” casting a cloud over already tenuous negotiations just days before a deadline on a government funding deal that Democrats have tied to immigration.

At issue is the Deferred Action for Childhood Arrivals program created by President Barack Obama to shield hundreds of thousands of these individuals, known as “Dreamers,” from deportation. Trump, who has taken a hard stance against illegal immigration, announced last year that he will end the program unless Congress comes up with a solution by March.

“DACA is probably dead because the Democrats don’t really want it, they just want to talk and take desperately needed money away from our Military,” the Republican president tweeted. “I, as President, want people coming into our Country who are going to help us become strong and great again, people coming in through a system based on MERIT. No more Lotteries! #AMERICA FIRST.” [ Source: CBN News (Read More…) ]