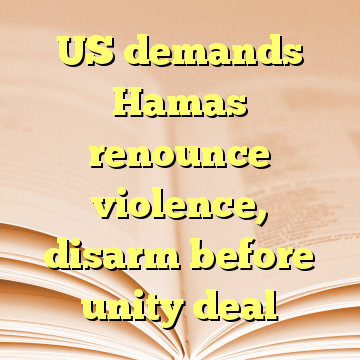 (Worthy News) – The United States called Thursday for the Hamas terror group to disarm and renounce violence before being allowed to implement a highly touted unity deal with Palestinian rival Fatah, in a first detailed response to the agreement.

In a statement, White House Mideast peace envoy Jason Greenblatt welcomed the Palestinian Authority’s impending return to the Gaza Strip as part of the renewed reconciliation efforts with Hamas, but said it was essential the terrorist group reform and adhere to the principles set out by the so-called Middle East Quartet.

“Any Palestinian government must unambiguously and explicitly commit to nonviolence, recognize the State of Israel, accept previous agreements and obligations between the parties – including to disarm terrorists – and commit to peaceful negotiations,” Greenblatt said in a statement released by the US Embassy in Tel Aviv. [ Source: Times of Israel (Read More…) ]