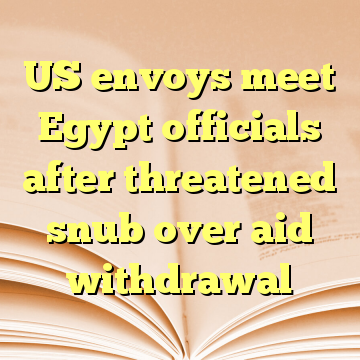 (Worthy News) – Egypt criticized a US decision to freeze $195 million in military aid on Wednesday, as a US delegation including presidential adviser Jared Kushner visited Cairo for meetings on the Middle East peace process.

The decision to withhold some financial and military aid in response to Egypt’s poor record on democracy and civil liberties came as a surprise, after US President Donald Trump pledged strong tries with the key US ally after they had deteriorated under his predecessor Barack Obama.

The US delegation met Egyptian Foreign Minister Sameh Shoukry on Wednesday, his spokesman said, after the meeting had earlier been dropped with no explanation from the minister’s schedule sent to reporters. [ Source (Read More…) ]