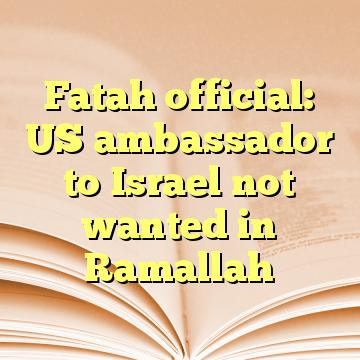 (Worthy News) – Palestinian officials and US President Donald Trump’s peace envoy Jason Greenblatt will meet in Jerusalem on Tuesday because the Palestinians do not want US Ambassador to Israel David Friedman to come to Ramallah, Fatah Central Committee Member Azzam al-Ahmad said in a television interview.

“Tomorrow there will be a new round of talks with the Palestinian delegation in West Jerusalem because we do not want one of the members of the [American] delegation to come to us…Why? Because he is the ambassador of America in Israel and the purview of his work is in Israel,” Ahmad said in an interview with the official Palestinian Authority television station on Monday.